Motivations with the highest number of hate crimes

Chronology of offences reported by the OSCE

Motivations with the highest number of hate crimes

28.13% crimes of
racism and
xenophobia

Determining the exact motivation for such killings involves a psychological and legal analysis of each case. Collecting data from journalistic and other open sources multiplies the motivations to be taken into account. The present classification is based on the motivations mentioned in the sources consulted.

OSCE. The data collected by OSCE Poland amounts to 2,635 hate crimes collected during the period from 2015 to 2018.
Racism and xenophobia is the motivation that produces the most incidents, amounting to 1,523 (57.80%). This is followed by anti-Semitic crimes with a total of 428 (16.24%).
Islamophobia is the catalyst for the third most numerous motivation for committing hate crimes, reaching 385 (14.61%).

The other two categories with the highest representation are the anti-Gypsy motivation with 178 (6.76%) cases and the attack against members of other religions with 58 incidents (2.20%).

The remaining categories represent a smaller percentage (anti-Christian 0.95% or sexual orientation 0.91%) or do not reflect any crime at all (homophobia or attacks against disabled people).

Chronology of crimes reported by the OSCE

Figure 53: Map of Poland with total number of hate incidents and motivations with highest percentages

Poland recorded a total of 768 hate crimes during the study period according to data from OSCE-recognised civil society organisations. Racism and xenophobia accounted for the highest number of hate crimes with 216 cases (28.13% of the total), followed by homophobia with 179 cases (23.31%) and those committed against Christian symbols with 136 cases (17.71%).
After these come those motivated by anti-Semitism 93 cases (12.11%) and Islamophobia with 41 (5.34%). With a percentage of less than 5% are the following: political intolerance 29 (3.78%), COVID-19 discrimination 25 (3.26%), attacks against members of other religions (24, 3.13%) and crimes against Roma (15, 1.95%).
In addition, there are a number of data that represent a percentage of less than 1% but should be mentioned. These are: Holocaust victims 4 cases (0.52%), attacks against disabled people (4, 0.52%), attacks of intimidation of the judicial system (0.13%) and victims of terrorism (1, 0.13%). The trend in the overall data for Poland is upwards, bearing in mind, however, that together with Hungary, it is the country among those analysed where there are the fewest records of the incidents under study.
Official data reflect almost no crimes motivated by sexual orientation, however, according to a report published in May by the European Union Agency for Fundamental Rights, 15 per cent of LGBTI people in Poland had experienced physical assault or sexual violence in the past five years. This is the highest rate in the Union. The majority of reported attacks on LGBTI people did not lead to prosecution.

President Andrzej Duda signed the “Family Charter” in which he advocated banning equal marriage, adoption by LGBTI couples and that schools should not mention plural sexual orientation.

Under the guise of ideological or political confrontation, there is also an exclusionary and stigmatising rhetoric against LGTBI people. In March 2019, some 100 local authorities passed resolutions stating that the territories they govern were “free of LGBTI ideology”.

In 2020, ILGA-Europe, together with the Polish LGBT rights organisations KPH (Campaign Against Homophobia) and Fundacja Równości (Equality Foundation), filed a legal complaint with the European Commission on the so-called LGBTi Family Charters and LGBTi Free Zones, denouncing discrimination on the basis of sexual orientation.

ILGA Europe denounces the alleged violation of the European Council Directive (2000/78/EC), which establishes a general framework for equal treatment in employment and occupation, as well as article 15 of the Charter of Fundamental Rights on professional freedom and the right to work, and article 21 on non-discrimination. ILGA has also received personal testimonies that refer to discriminatory situations based on her sexual orientation

The absence of data on hate crimes in Poland symptomatic of the lack of control over the data.

Stefan Golebiowski. On 7 May 2015, a 14-year-old high school student Stefan Golebiowski committed suicide as a result of the homophobic bullying he had been suffering at school for years. Because of his trousers, because he liked to wear “skinny jeans”, because “his hair was combed”, or because he liked to take care of his appearance, he was called a “fairy”. On the 5th of May at school, during recess, some pupils hit him on the head with a rock, and after school, someone ripped the front light off his bicycle. Two days later, Stefan ended his life.

The Plock Regional Prosecutor’s Office investigated the death of the teenager. The boy, who had a cleft lip and cleft palate, was also abused in primary school.

When he took his own life, many hateful comments were posted online. A Facebook page was created with the slogan: ‘Dominik Szymanski – it’s good that he died’, where users posted homophobic and racist comments, for example: ‘Dominik brought shame to the White Race, I can’.

The prosecution referred the cases of six teenagers who allegedly harassed the child to the juvenile court in Mlawa.

ANONYMOUS. During the night of 2-3 October 2019, on Roosevelt Street, “unidentified assailants” beat and killed a 26-year-old Polish citizen of Roma ethnicity. The incident took place near a building where he lived with his family. His brother found the victim lying unconscious on the floor. It was discovered that he also had both legs and his pelvis broken. He died in hospital.

Suicide of a transgender teenager. On 6 May 2019, transgender teenager Milo Mazurkiewicz committed suicide by jumping from the Łazienkowski Bridge in Warsaw. The victim was a volunteer at Grupa Stonewall, an association for LGTBI rights. On his Facebook profile a few days earlier he had complained that he was fed up with “psychologists, doctors and therapists” who did not admit his status. The young man’s suicide sparked a national debate about the treatment of transgender people.

Dozens of Polish municipalities declare themselves “LGTBI-free zones” and the conservative weekly Gazeta Polska distributes stickers with this slogan. In July 2019, the conservative weekly Gazeta Polska joins the campaign of dozens of Polish municipalities to declare themselves an “LGTBI-free zone” and distributes stickers with the slogan in its weekly edition.

Dozens of Polish municipalities declare themselves “LGTBI-free zones” and the conservative weekly Gazeta Polska distributes stickers with this slogan. In July 2019, the conservative weekly Gazeta Polska joins the campaign of dozens of Polish municipalities to declare themselves an “LGTBI-free zone” and distributes stickers with the slogan in its weekly edition.

Far-right groups boycott an LGTBI demonstration in the Polish city of Bialystok. In July 2019, Polish police arrest 25 people accused of sabotaging the first equality march organised by the city of Bialystok. Police had to intervene and protect those gathered when hundreds of far-right demonstrators from all over the country burst into the crowd, burning multicoloured flags and shouting “No sodomy in Bialystok!” They had been called by more than 40 groups, including hooligans from the Jagiellonia Białystok team. Their aim was to prevent the initial procession, which also included children, from continuing its course. A large number of people were injured, including an Oko.press journalist, Przemyslaw Witkowski, who had criticised anti-gay graffiti. The harassers ended up confronting the police with stones and bottles. 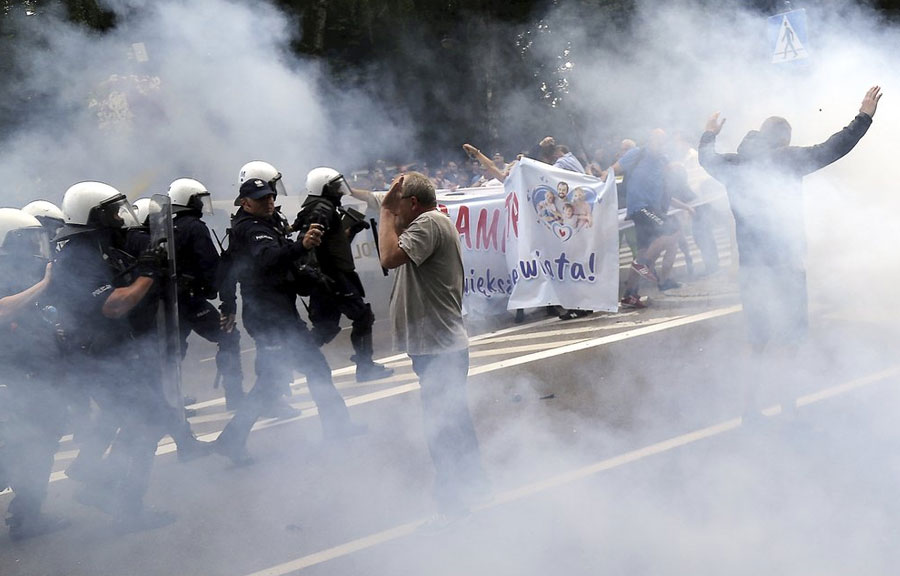 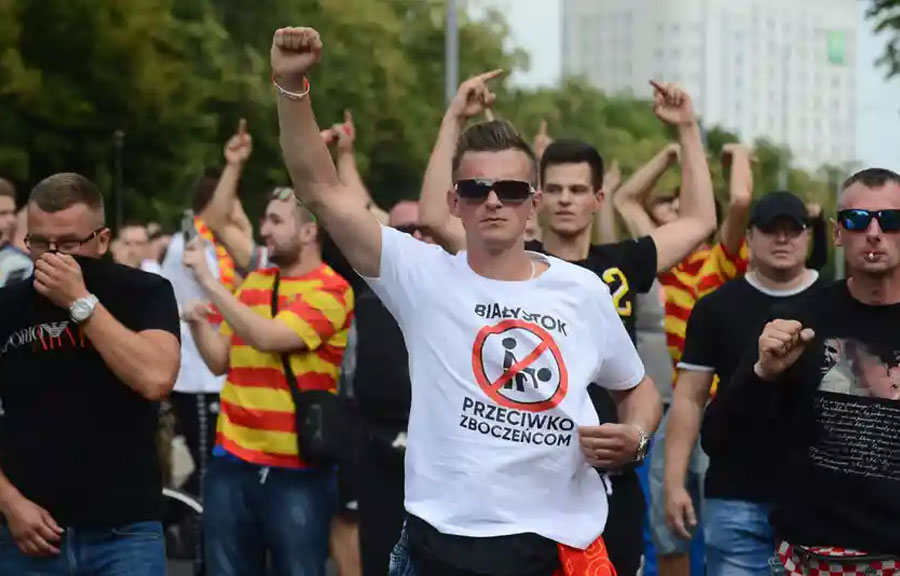